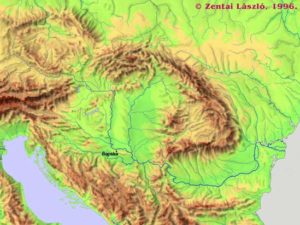 The name
The site was actually named after the nearby village of Bapska (see the map on the right). The name Bapska has already been widely used in various publications. The exact location of the site is named Gradac – a toponym used for a large number of elevated settlements dated from prehistoric times to the Middle Ages in Croatia.

History of Research
First findings from the area around Vukovar and Bapska arrived in the Archaeological Museum in Zagreb (in short AMZ) in 1901/02. They were collected by local inhabitants. Until 1913. the Naturhistorisches museum in Vienna and the AMZ acquired a certain amount of archaeological items from the site near the village of Bapska for their collections, but the material was without any scientific context. Taking into account that fact, Dr. Josip Brunšmid, director of the AMZ and the first Professor of Archaeology at the University of Zagreb (CRO), decided to excavate few test ditches in the area, one of which was in Bapska. The year was 1911.
The material from these excavations as well as the and previously collected finds were published in Corpus Vasorum Antiquorum.
Another archaeological excavation in Bapska took place in 1938/39. and it was headed by the German Professor from the University of Tübingen, Dr. Robert Rudolf Schmidt, who at the time, conducted excavations on the site Vučedol. Some of his findings were presented in monograph Die Burg Vučedol (1945.), written by himself. During Schmidt’s excavations, Vladimir Milojčić was his Assistant. In monograph Chronologie der Jüngerensteinzeit Mittel-und Südosteuropas (1949), Milojčić summarized, described and dated part of Schmidt’s finds from 1938/39.

Besides the two aforementioned layers, on the site were Starčevo and Baden cultures, as well as the Bronze Age finds. (…)

Department of Archaeology in Zagreb is currently working on the unpublished part of material excavated by Prof. Dimitrijević, under the kind permision of Gradski muzej Vukovar and its Director mrs.Ruža Marić.