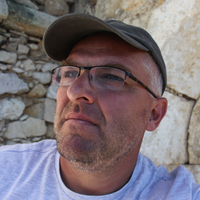 
Krešimir Filipec was born in 1969 in Zagreb where he attended the elementary and classical grammar school. He was enrolled in the single major archaeology study program in 1989 and single major history study program in 1990, both at the Faculty of Humanities and Social Sciences of the University of Zagreb. He graduated in archaeology in January 1995 with the thesis “Sisak (Siscia) in the Early Middle Ages”. During the course of his studies and after graduation, he participated in numerous archaeological fieldwork projects in Croatia, and he managed the protective archaeological excavation of the sites St Rok in Kumrovec and Parish church in Đakovo. In February 1996 he became a member of the faculty of the Department of Archaeology (Faculty of Humanities and Social Sciences, University of Zagreb) as a junior assistant. He participated in the project headed by prof. Marin Zaninović, PhD. Since the very beginning, he was involved with the work of the Chair of General Medieval and National Archaeology. He was on his first study visit at the Institut für Ur.- und Frühgeschichte der Univesität in Vienna in 1997. His thesis for a magister degree “Medieval cemetery in Đakovo” was approved and presented in 1998. His second study visit was in 2002 at the Institute for Archaeology Eötvös Loránd University – Faculty of Humanities in Budapest. He obtained a doctoral degree in 2002 with the thesis “The settlement of medieval Slavonia according to archaeological sources”.
During that time he participated in and managed several protective archaeological excavations (Parish church in Đakovo, Old Town of Konjščina, Lobor – Our Lady of the Mountain, Church of St Mary in Blizna). Since the beginning of his employment, he has been involved with teaching subjects at the Chair of General Medieval and National Archaeology (field school since 1996, seminars since 1998 and all General Medieval subjects – Germans, Huns, Slavs, Avars since 2002). He became senior assistant in February 2003, assistant professor in November 2003, associate professor in November 2010, and full professor in 2018. He introduced several new undergraduate and graduate subjects in 2006 and has managed graduate program of medieval archaeology since that time. He participates in lectures at the Postgraduate doctoral study of archaeology and Postgraduate doctoral study in medieval studies at the Faculty of Humanities and Social Sciences, University of Zagreb. He managed the South Pannonia in the Early Middle Ages project since 2004. Archaeological excavations on the sites of Đakovo – parish church, Lobor – Out Lady of the Mountain, Belišće – Zagajci and several sites on the Slavonia Highway were part of that project. The Archaeological and Bioarchaeological School is held annually at the site of Lobor – Our Lady of the Mountain. He has written and published many books and scientific papers, and participated in numerous conferences in Croatia and abroad. He has edited and reviewed several books and journals. He worked as assistant minister of culture since January 2004 until June 2005 and he managed the Directorate for the Protection of Cultural Heritage. Since 2009 until September 2011 he was Head of the Department of Archaeology, and since 2009 he has acted as Chairman of the Chair of General Medieval and National Archaeology.